The AEF was established in 2017 as a forum to conceptualize, evaluate and facilitate Japan-India collaboration in connectivity and developmental projects in and with the North Eastern region of India.

Japan attaches a great importance to the cooperation for the development of India’s North East, anchored by its historical ties, trust and friendship. The North East stands on a place strategically important to realise a free, open and inclusive Indo-Pacific; and Japan is proud to have been a partner with the people of North East in their aspirations for a better and sustainable future. Japan is the only country which has an independent framework for discussing the development of India’s North East and the one at such a high-level.

Japan has been actively providing assistance to various projects in the region. The ongoing ODA projects supported by Japan amounts to more than 231 billion yen (appx. INR 1,600 crore).

The AEF has been a driving force to coalesce the developmental efforts of India, its North Eastern region and Japan. The AEF provides guidance for the joint actions between Japan and India, as well as with the North Eastern region. In today’s meeting, such key areas as road connectivity, health (including water and sanitation), forest conservation and people-to-people exchanges were covered to pursue further collaborations.

For the ongoing projects supported by Japan, please see the attachment. 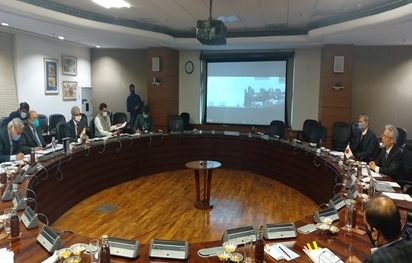