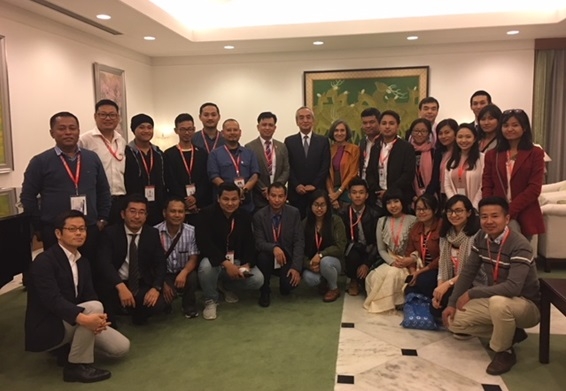 On 27 October, Ambassador Hiramatsu had an interaction with 23 young talents from Manipur and Nagaland departing Japan in the midnight that day. The group visits Japan from 28 October to 4 November under IRIS Program, a youth invitation program by the Government of Japan, which invites promising young talents from the North East Region of India.

During the visit, the members will visit Tokyo, Saitama, Chiba and Hiroshima, having wide-ranging experiences such as participating in environmental and disaster prevention programs, vising Hiroshima Peace Memorial Park and Shibuya/ Harajuku area, as well as meeting with Parliamentary Secretary for Foreign Affairs and learning a local government’s effort to boost eco-tourism.

The Program was announced by Ambassador Kenji Hiramatsu at the commemoration of the 73rd anniversary of Battle of Imphal in May 2017. The name “IRIS Program” was taken from a mysterious link between Japan and the North East Region of India, i.e., one species of iris called KOMBIREI that grows mainly around Loktak Lake near Imphal and commonly used in festivals was found to be a new species in India and identical with KAKITSUBATA which was known as “Japanese iris” and considered an indigenous species of Japan for more than one thousand years.

Like this episode, it is hoped that IRIS Program will bear fruits and seeds and eventually bloom as flowers of friendship between Japan and North East Region of India.