At the inauguration session on 3 August, in addition to the members of the Forum, relevant stake holders such as think tanks and press participated and discussed challenges and potential in the region as well as expectation to Japan’s cooperation.

As Ambassador Hiramatsu elaborated in his inaugural address, Japan has been placing a special emphasis on cooperation in North Eastern Region for its geographical importance connecting India to Southeast Asia, while India is promoting “Act East Policy.” In addition, through the experience of Battle of Imphal and Kohima, Japan has historical connection with North East. In this regard, it is also important to strengthen cultural exchanges with the region. Along with high expectation expressed from India to Japan’s cooperation in the region, there is a great potential to expand cooperation. While Japan has already been implementing cooperation in various fields in North East, Japan and India jointly launched this Forum to further expand cooperation. (link to Ambassador’s speech, link to Japan’s cooperation in North Eastern Region)

Mr. Verma touched upon the special relationship between North Eastern Region and Japan based on its history and stated that this Forum needs to be a long-lasting initiative. He pointed to the need to develop commerce in such sectors as tourism, organic products and bamboo, utilizing the sustainable natural environment of the region. He also explained the need to invest in infrastructure and disaster management, and expressed expectation for cooperation utilizing Japanese expertise and technologies. At the end of his remarks, he emphasized the importance of continuous and sustained dialogue with Japan through the Forum.

Ambassador Hiramatsu delivering his speech at the Forum (middle)

Overview of the session 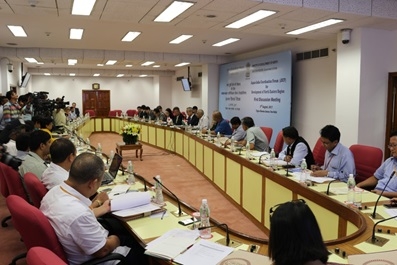