The Exhibition was one of the events of “2017 The Year of Japan-India Friendly Exchanges”.

In February 2008, Ms. Hiraoka held her 2nd exhibition on the occasion of exchange year marking 50th anniversary of Japan-India cultural agreement and presented her painting work titled “Taiga (The Large River)”, featuring the Ganges River and a life of ordinary Indian woman, to the Embassy of Japan in India A decade later, Mr. Yutaka Kikuta, Minister & Deputy Chief of Mission, Embassy of Japan, attended the event on 17 and expressed his appreciation for her continued dedication to the promotion of cultural exchange between the two countries, mentioning that the “Taiga” is still on the wall of the Embassy.

Ms. Tatsuko Hiraoka is an oil painter based in Kyoto, Japan, and has been holding her solo exhibitions in New Delhi since 2006. 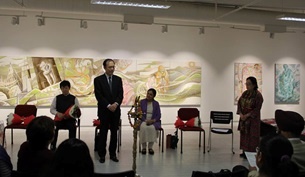 The “Taiga” painting in the Embassy of Japan.